As is the tradition with the Dorset Road Race League, the new season kicked off on New Year’s Day with the Broadstone Quarter Marathon

The Broadstone Quarter route starts and finishes on the Broadway in Broadstone and consists of two laps round a notoriously triangular circuit, with the first lap containing an extra section to make up the distance. This race is organised by Dorset’s most sociable runner, Sarah Swift, and her Poole Runners posse.

With it being a two-lap course, that consequently means that the competitors have to tackle the infamous Gravel Hill twice!! A great way to ease them into the New Year!

Welcome to the newly formed Twemlow Track Club who entered their first season in the league with a host of names that could be potential challengers including Richard Swindlehurst, David Jones and Gareth Alan-Williams.  Also to Dorchester RIOT in their first season. The race marked the beginning of   Bournemouth AC’s defence of the First Division Men’s League title they won in 2019.

As ever with the league races, the competition was strong. Chris Alborough of Poole AC was a serious contender the way he’s been running of late. His teammate Rob Doubleday was also there, along with Andy Leggott of Lonely Goat RC. Paul Bullimore from Egdon Heath Harriers was in action as well and the newly formed Twemlow Track Club.

Completing the first lap in 21:38, Jacek Cieluszecki (BAC)  was in 5th position. He was feeling pretty good though so decided to up the pace on the second lap. When he reached Gravel Hill for the second time, he began to chase after Chris Alborough and Ben Renshaw from Bridport Runners who were out front. On Dunyeats Road, with about half a mile left, Jacek caught Ben from Bridport. He was closing in on Chris as well but the gap proved too big in the end and Chris Alborough picked up the win, finishing in a time of 35:45. Ben Renshaw took third place in a time of 36:04, ahead of Andy Leggott who was fourth in 36:25. James Bewley of Victoria Park Harriers and Tower Hamlets AC was 5th in 37:24, just in front of unknown under-20, Adne Nesje Hernes, who took 6th place in 37:32.

Neil Sexton of Poole Runners had a good run finishing in 14th place with a time of 38:29 before the Egdon Heath Harriers train arrived. Jamie Barrington took 15th place in 38:35 with Bruce Campbell following shortly after to take 16th in 38:42. Paul Bullimore was 18th in 38:49. Nathaniel Willmore of Poole Runners was the last man to get in less than 40 minutes, finishing in 39:54.

Dave Hicks was the third man in for Poole AC, finishing 19th in a time of 38:53 before Egdon Heath had their fourth man over the line when Simon Arthur clocked in at 38:55.

Andy Clements of Poole AC was a comfortable winner in the male 60-69 category finishing 34th overall in a phenomenal time of 40:22. Stephen Hogarth, also of Poole AC was second in that category in a time of 44:32 which put him in 78th place overall.

With no David Cartwright there, Ian Graham thought he had a golden opportunity to take the 70+ category. As always though, another V70 popped up to deprive Ian of that accolade. That was Jim Brumfield of Egdon Heath Harriers in a time of 52:17

The Dorset Road Race League team win for the first fixture was sealed by Bournemouth AC though when Alex Goulding completed the course in a time of 39:09 to take 22nd place.

In the ladies’ race, it was Emma Caplan (BAC) who struck gold, finishing in exactly 41 minutes.  Juliet Champion of Poole AC finished as second lady, completing the course in 41:24 which put her in 44th place overall. Although she wasn’t feeling the freshest considering it was New Year’s Day, Helen O’Neile did well to take the prize for third lady. Caroline Stanzel of Poole Runners was 4th lady in a time of 42:43, which put her in 61st place overall. Diana Leggott arrived at the line in a time of 43:25 to finish as fifth. Last year’s (2019) champion Alex Door stepped into the New Year by finishing as 6th placed female a time of 44:12.

Sealing the women’s first division team  win for Bournemouth AC in her debut run, Heather Khoshnevis got to the line in 48:01, which put her in 140th place overall and made her 18th placed lady. Heather was also second in her age category to Liz Goldsack of Purbeck Runners who finished in 47:24, putting her in 126th place overall.

First place in the female 60-69 category went to Caron Stevens of Royal Manor of Portland who got over the line in 56:18, putting her in 253rd place overall.

After the race, the DRRL trophies for the 2019 season were presented. The ceremony was compered very well by Jon Sharkey and Steve Way was the celebrity guest who handed out the prizes. They both brought a nice light-hearted and humorous flavour to the proceedings.

It’s going to be an intriguing and enthralling season ahead that much is certain.

Comments on the race are welcome. Please use the box below 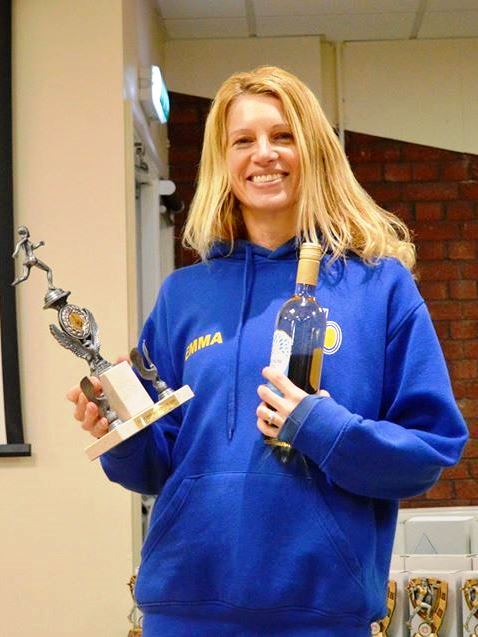 About the Author: Mike Towner